Car Wash Fundraiser With Coupons – A new twist on the traditional car wash fundraiser is to partner with a local car wash and just sell coupons for their service offerings.Your group negotiates a discounted cost basis for the various car wash offerings on the Coupons that you create. You want the coupon deal to have value for the business and  the customer as well as your group.

Another benefit of this approach is that your group doesn’t have to do all the manual labor involved with the traditional car wash fundraiser. That means this would work well for smaller groups as well as those not physically able to do the work.

Instead, its all about reaching out to the largest number of people you can find who would be willing to purchase your coupon. Selling large amounts of discount coupons or any type of fundraising product offering works best if you go where people are already shopping.

You want to set up a sales table outside a high-traffic retail location such as a grocery store, home improvement store, WalMart, etc. Peak times are best such as Saturday mornings. Your sales table should have good visibility as people approach the entrance and should also be available to people who are exiting the business.

You will want to place several large posterboard signs with easily readable wording that tells who you are, what you are offering, and explains why you are fundraising.

Work your sales table with a two-hour shifts of a multi-person crew. Stay active and move about. Engage approaching customers with a wave, a friendly smile, and a warm welcome.

Pitch people with a short message like this: “Hey there! We’ve got a two-for-one car wash coupon that’s good for a year. Can you help us out because we’re raising funds to buy new band uniforms?”

You can also remind people that they can pick up a coupon on their way out.

And that’s how to do a car wash fundraiser with coupons.

Courtney Pisano came up with a great fundraising idea – creating a giant sticky note mosaic at a local mall – to raise funds for her own non-profit organization called Children’s Lasting Power.

She found out there was a world record for creating Post-it note mosaics and she instantly knew it was the perfect match for her fundraising efforts.

Courtney raised $5,000 from corporate sponsors and from mall shoppers who donated $1 to sponsor a sticky note in the world record mosaic.

Courtney enlisted the help of volunteers to carefully place the colored squares in patterns.

“She comes up with good ideas, but I’ve never heard of anything like this before,” said Galen Pischke, a volunteer who spent six hours on the floor sticking down the squares.

“I’m taken by her creativity and enthusiasm, and I wanted to be a part of it,” said Carroll Cope, another volunteer, as she placed dozens of blue sticky notes into a row. “It’s admirable, and she is laying the groundwork for other people to think outside the box with fundraising.”

“Whether we break a record or not, raising money is a great thing,” said Leigh Pisano, Courtney’s mother.

The mosaic project is the largest fundraiser so far for Children’s Lasting Power, but Courtney doesn’t intend for it to be the last.

She’s already thinking ahead to next year when she is going to partner with another organization to try to raise $11,000 to build a kitchen for a school in Malawi.

Gotta love how she came up with an awesome fundraising idea linking a world record attempt with raising funds for orphaned children.

Just a quick FYI – Not doing too much blogging anymore as its a lot easier to connect on Facebook.

You can find our page here: http://www.facebook.com/FundraiserHelp

A group of young men have put together a unique fundraising idea – a Ninja Challenge Obstacle Course featuring a 5k run with a plethora of challenges confronting you along the way. 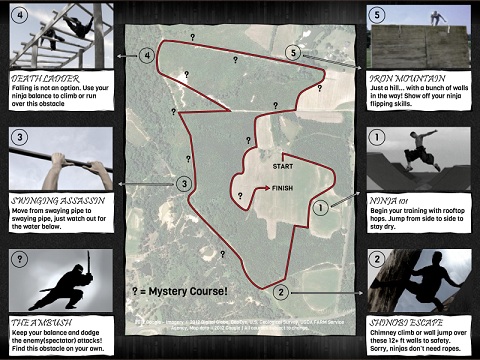 The Ninja Challenge is a 5k run filled with challenges to bring out your inner ninja. The course includes a 12-foot wall to climb over, a water-filled pit where you swing across Tarzan-style using a series of dangling pipes on ropes, a vertical chimney climb between two 12-foot walls, another obstacle where you leap from rooftop to rooftop, and many more obstacles along the way.

Volunteers are stationed at each obstacle to coach and encourage competitors. You can opt out of any obstacle that is beyond your capabilities by doing pushups or situps.

Its all in good fun to raise funds for the Red Cross and honor a late friend of the organizing group.

The entry fee is $55 and contestants will compete in waves, with staggered starts every 30 minutes and prizes for top performances.

Each wave of contestants will contain a “Super Ninja” to test your ninja chops against.  If you beat the Super Ninja in your wave, then you earn a spot in the Super Ninja Hall of Fame and a free entry in a future fundraising challenge.

You can find out more about this unique fundraising idea here: